Fresh off a wave of success in the state Capitol last year, animal welfare groups are taking aim at a new target this year: hunting with lead ammunition.

The Humane Society, Audubon California and Defenders of Wildlife are behind a major push to make California the first state to ban lead ammunition for all types of hunting, setting the stage for a showdown with some hunters and adding another layer to the heated gun control debate.

The state already bans lead ammunition for hunters in the range of the endangered California condor, but environmentalists say a statewide ban is needed because overwhelming scientific evidence shows condors, bald eagles and other birds are still dying from lead poisoning when they 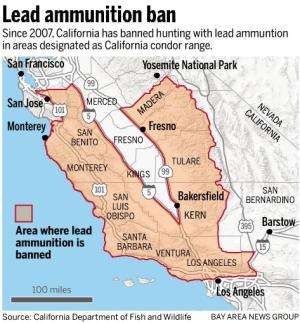 eat dead deer and other animals shot by hunters.

The groups are sponsoring a bill in Sacramento that is expected to be introduced by Friday. They are also asking the state Fish and Game Commission to pass a lead bullet ban.

“Countless wild animals suffer and die needlessly every year from the continued use of lead ammunition,” said Jennifer Fearing, state director of the Humane Society of the United States. “It is put in the environment and stays there. It’s toxic, and it’s cumulative.”

Over the past 30 years, lead has been banned in gasoline, paint, new home pipes and other materials, to protect public health. The administration of President George H.W. Bush also banned lead shot in 1991 for hunting ducks and other waterfowl

Hunting is less damaging with bullets made from other materials, particularly copper, green groups say.

“This is the kind of issue where hunters should be taking the lead,” said Fearing.

After studies showed California condors dying from ingesting lead, former Gov. Arnold Schwarzenegger signed a bill in 2007 banning hunters from using lead bullets to shoot deer and other game within the condor range — roughly defined as from Los Angeles to San Jose, where the birds have been seen around Mount Hamilton. But that hasn’t stopped condors, one of the world’s most endangered species, from being poisoned.

A review last year of more than 1,154 blood samples taken from wild California condors and tested between 1997 and 2010 found that 48 percent of the birds had lead levels so high that they could have died without treatment in animal hospitals. The scientists who conducted the study said that because condors can dine on between 75 and 150 dead animals a year, if just one hunter violates the rules, or if a condor flies outside the area where lead bullets are banned, the birds can ingest enough lead to poison or kill them. Lead remains the leading cause of death for adult condors in California, they noted.

Critics, led by the National Rifle Association, say copper bullets cost more than lead — roughly $40 for a box of 20, compared to $20 for lead bullets — and don’t fly the same. They see the move as the latest example in a 20-year trend in California in which urban residents and environmentalists have taken a larger role in setting hunting and fishing rules as the number of hunters and fishermen has declined.

“These people want to ban hunting. Go to their cocktail parties and snuggle up to them, and that’s what they’ll tell you,” said Don Saba, a member of the NRA board of directors. “They characterize hunters as crazy rednecks, even as they talk about tolerance and diversity.”

Saba, a Tuscon, Ariz., resident who has a doctorate in toxicology from UC Berkeley, appeared last August at a state Fish and Game Commission meeting to question the science linking condor poisoning to bullets.

“It’s far more than chipping away at hunters’ rights,” he said Tuesday. “There’s an anti-firearms mentality. Their ultimate goal is to ban guns.”

Scientists say it’s clear bullets are to blame for the lead poisoning. They have published studies that match isotope ratios of lead in condors’ feathers to isotope ratios in lead bullets.

Saba says that lead paint and other substances, like lead from batteries, also can have the same ratios, and that condors may be eating paint from old fire lookout towers, eating lead in dumps or finding it other ways. But researchers dispute those claims.

“What is lacking is any evidence — and certainly no published evidence — to substantiate their claims,” said Don Smith, a professor of microbiology and toxicology at UC Santa Cruz.

Biologists track the birds with GPS and observe them closely, Smith noted.

“They are not going to lots of fire towers to eat paint. They are not eating wheel weights off wheels,” he said. “There isn’t one shred of evidence they have to support any of that.”

Last year animal welfare groups won passage of numerous laws in Sacramento, including a ban on hunting bears and bobcats with hounds.

Condors, whose wingspan can reach 9 feet, once ranged from British Columbia to Mexico. Because of habitat loss, hunting and lead poisoning, the majestic birds’ population dwindled to just 22 nationwide by 1982. In a desperate gamble to stave off extinction, federal biologists captured all remaining wild condors in 1987 and began breeding them in zoos. The birds’ offspring have been gradually released back to the wild.

Today the California condor population has grown to 407. Of those, 231 live in the wild in Big Sur, Pinnacles National Park in San Benito County, Southern California, Arizona, Utah and Mexico.

“We’re not against hunting,” said Dan Taylor, public policy director for Audubon California. “But hunting is a privilege. For hunting to continue in a state like California it must be done in the most ecologically and sound way possible.”